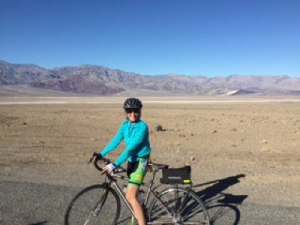 Today is my sister’s birthday, and I just got home from a wild time we spent together in Las Vegas (well, not so wild really) and a fantastic bike trip in Death Valley.Ever since a meditation buddy told me about a transformational trip he took there, I have always wanted to go – to Death Valley, that is. It seemed fitting to use some of the money left in the joint bank account I had with my mom to finally go, now that she is gone. I booked a 4 day trip with Backroads, breathtakingly expensive, but worth every penny, especially since Trudie was paying for it. The trip left from Las Vegas, not really on my bucket list of places I was dying to see. Since I had to stay over at least one night there I figured the one person I might enjoy being in Sin City with was my sister. I suggested a celebration get-a-way and she thought it was a great idea.

She wanted to splurge on luxury, so we booked two nights at the Bellagio. It was actually dazzlingly gorgeous and opulent, elegant and sumptuous, over the top, yes, but classy and well done some how. Our room looked out over the dancing fountain and the Eiffel Tower across the street, bizarre, as were many things, including the chocolate fountain and the casino, right out of a James Bond movie. We packed a lot into two days: a sort of tacky dinner at Harrah’s buffet and hysterical drunken laughing at “Menopause the Musical,” a more elegant dinner at Spago in the Forum Shops at Ceasar’s Palace followed by Celine Dion at the Colluseum – yes, she is a fabulous singer and performer. We also walked a lot and saw the volcano erupt at Treasure Island, watched Atlantis sink in the Forum, shopped on the Grand Canal at the Venetian, found a really lovely Picasso exhibit at the Bellagio, and hung out at the magnificent pool. That was actually plenty, and Susanne and I enjoyed being together, in this crazy playground, as the start of a new part of our relationship – after mom.

Thursday morning I met the Backroads trip at the side entrance of Ceasar’s and we set off into the desert, leaving the bustle and the lights of the strip behind. During the 2 1/2 hour drive I got to know some of our group of about 20 – interesting, athletic, well-to-do middle age folks who all shared a common interest in biking in beautiful and remote places. We arrived at the Death Valley National Park Visiter’s Center and explored the exhibits and had a great picnic lunch while our guides readied our gear. After some introductions and safety tips we set off on our bikes. The cue sheet was pretty simple – turn left out of the parking lot, continue for 22 miles to Mesquite Sand Dunes.

The air was dry and cool, the sun was hot, and some whispy clouds kept the temperature comfortable, below 80. The titanium touring bikes felt great, especially on the gently rolling hills, but sometimes, it was actually hard to tell if we were going up or down. The scenery was spectacular and just stayed that way the whole four days. Some times I road with various people in the group, and sometimes I was completely alone, just mountains, road and endless sky. This was incredibly wonderful, almost like being on a meditation retreat. I felt completely safe and knew that, even though I couldn’t see another person or car, other riders or the support van was near by if I needed anything. It was never very far to the next rest stop where the van had snacks and water, and it was impossible to get lost with one road to ride on.

At the sand dunes, I used a clean out house and walked around and saw where they had filmed some scenes from Star Wars. On the ride back – everything in this huge and open landscape looked completely different going the other direction on the same road – I was hoping to make it the whole way, but 44 miles was a lot for me at this point. Just as I started to get hot and tired, the van drove by and I waved them down and let them take me the rest of the way back to the hotel.

Our hotel for three nights was the Inn at Furnace Creek. It was elegant and understated in an old west sort of way, and the beautiful pool was fed by the natural hot springs of Furnace Creek. Food and socializing was warm and delicious, and the view from my porch was breathtaking, especially as the sun came up in the morning.

Day 2 we road 17 miles to Bad Water Basin, one of the lowest points in the US. The road had actually been washed out the week before by some freak storms that caused flash floods. We were lucky that the route had re-opened, and it was fascinating to see where the Park Service had plowed the rivers of mud off the road. There was actually standing water out in the middle of the great salt flats, very unusual. The air was deliciously cool, but the sun was bright and hot, and the wind picked up in the afternoon, so the trip back to the hotel was challenging. Day 3, our planned route was still washed out from the floods, so the fantastic guides improvised and drove us to Rhyolite, a ghost town near the Nevada boarder. We road about 40 miles back to the hotel, climbing up to 4300 feet at Daylight Pass and Hells Gate where the vans and a wonderful picnic awaited us. Then we had a thrill riding down into Death Valley and along more rolling hiills, with a stop at the Borax mining museum. I was proud of myself for making it all the way back to the hotel and very happy to soak in the deliciously warm waters of the pool.

The last morning we went on a spectacular walking hike though some canyons called the Badlands. Then it was back in the vans for the return trip to civilization and the very different energy of Las Vegas. My flight left at 10:30 pm, so I had to kill a lot of time. Most folks on the bike trip disbursed, so I hung out by the pool and in the lobby at the Bellagio until it was time for my shuttle to the airport. The busy glitz was a harsh contrast to the immense quiet of the desert, but that was the more powerful impression that has stayed with me, and I am greatful for it.