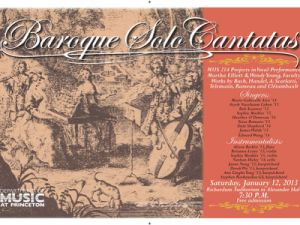 The Music 214 concert was last Saturday night, and it was a huge success! During the Fall semester, harpsichordist Wendy Young and I were co-teaching Music 214 – projects in vocal performance, as a Baroque Solo Cantata class. We had 9 singers, 4 keyboard players, 1 cellist, 1 flute player, and 2 violinists, one of whom was also a singer (my student Sophia Mockler, who also played violin and sang the small part of the daughter in Dragon Mother). I had a great time teaching the class with Wendy. Unfortunately, she had to go through the death of her mother-in-law AND her mother within two weeks early in the semester, but I think overall she had a great time teaching the class as well. Of course the students were all sick and couldn’t sing at some point during the semester. During the last week of preparation leading up to the concert there were the familiar “forgotten” or “slept through” rehearsals, last minute details demanded by the concert office or the hall staff, various “I just realized have an exam scheduled during the dress rehearsal” which had to be worked out, but nothing too insolvable. All the singers were healthy for the concert, all the parts were prepared and taped by the instrumentalists, the keyboard players all took extra rehearsal time to get used to the harpsichord in Richardson. The concert went very smoothly, the program ended up being just the right length, everyone performed better than their best – as the Princeton students always seem to do – and the audience loved it! At several points Wendy and I squealed to each other “I’m having the best time!!!” The important dignitaries – Michael, Gabriel, Wendy Heller, were hugely impressed and inspired to push for more of this sort of thing in the future. Wendy and I were bursting with pride for our students. I think they had a wonderful experience.