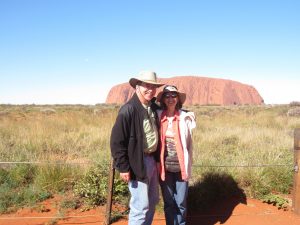 So there we are standing in front of Ayers Rock, or Uluru, as the indigenous Australian people call it. It was winter down under, but we enjoyed beautiful October-like weather in the red center of the country. After a week in Brisbane at the voice teacher conference, Michael and I set out on a whirlwind 10 day tour of the top sights in Australia. We did a lot of research online and in books in preparation, and thought we might be able to arrange the trip ourselves, but we ended up letting Kensington Tours take care of everything. In honor of our 30th anniversary we wanted to splurge and relax a bit. Splurge was right – the whole trip was quite expensive, but actually seemed like a good deal overall. The hotels were wonderful and luxurious, all the day trips were well done, and all the transfers and different pieces fell into place smoothly. Relax was not in the cards. Everyday was packed with another fabulous adventure – we were picked up early and dropped off late. Luckily we were mostly adjusted to the time zone by now and slept pretty well, exhausted from all the activity.
So the first day we flew to Cairns and were driven to Kewarra Beach Resort, an elegant property on a gorgeous South Pacific beach. Since it was winter and the sun set around 5pm, it was mostly dark when we were there. Even though it was unseasonably cool, it still felt balmy and tropical as we dined in the open air restaurant under the palm trees with strange jungle sounds all around. We even saw a wallaby grazing on the grass just outside our cabin. The next morning we were picked up – in the dark – and wisked back to Cairns for a day of snorkeling out on the great barrier reef. It started out rainy and windy, but turned into a beautiful sunny day with great, clear conditions for seeing fabulous choral, colorful fish, rays and sea turtles. I loved it!!!!! The water was wavy and choppy, but I felt comfortable and confident swimming in the wet suit, flippers and mask. We met some interesting folks on the high speed catamaran including our blond, blond crew.
The next day we were picked up early again and wisked off to the Daintree National Rainforest. The tour included a guided walk with an aboriginal medicine man who told us all about the poisonous plants that could kill or heal you. After a lunch of Baramundi and exotic fruits, we went on a crocodile hunting cruise on the Daintree River and saw “Scarface” both lounging on the mud bank, and gliding through the water – much more scary! Once again it was too late to swim in the ocean by the time we got back to Kewarra – even though there weren’t any of the poisonous jelly fish in the water in winter, dusk was prime crocodile hunting time according to our guide for today. I wish we had arranged to stay here one more day to enjoy the beautiful resort and the beach. Oh well, next time.
The next day we were up early again and flew to Ayers Rock, arriving in time to have an afternoon walk around Uluru and a champagne sunset viewing. For dinner, we walked across the desert to the cook your own BBQ and ate grilled Kangaroo and buffalo sausage with all the fixin’s. We slept well that night with the windows open to the cold, fresh air. The next morning we were up early again for a sunrise breakfast and viewing, and a hike though Kata-Tjuta, the other amazing rock formation out in the middle of nothing else. It was mighty cold before sunrise, and we had on every layer of clothing we had brought with us. The outback was amazingly beautiful, especially since it had rained a bit and all the scrubby desert plants were blooming with an astonishing variety of flowers. The two rock formations were amazing – powerful and awe inspiring – no wonder they hold such significance for the native people. We were back at the tourist village in time for lunch and some afternoon rest. The National park and hotel complex is very well managed to preserve the wilderness and honor the sacred sites. There were some native dance and hunting demonstrations, and local aboriginal artists creating the famous dot paintings that are such a central part of the dreamtime culture. At dusk, we were taken to a special outdoor site for the “Sounds of Silence” dinner. Lots of wine and digerydoo music foiled the silence, and we got colder and colder as the sun set in a blaze of red and orange clouds. We had fun with our dinner companions, and the food was wonderful, including all the local specialties: Kangaroo, Baramundi, Crocodile, tropical fruits and desert pear crumble with custard for dessert. Surprisingly, even though we are on the other side of the planet, Jolly Old England never feels very far away. The clouds made the star talk a little hard, but we didn’t recognize any of the constellations anyway, being all upsidown in the sky.
In the morning we had to leave for Sydney. I wish we could have stayed here another day as well. The power and beauty of the place were palpable. Before we left, we bought a dot painting from the local artist in residence, and also had an interesting talk with some of the indigenous staff members at the hotel complex. It seems to us, in our limited view, that Australia does a much better job honoring their native people than the US does. At the tiny airport, we bumped into a former PUO student of Michael’s who had been at an astro-physics conference at the hotel complex. Two weeks before that, he had been at a Princeton friend’s wedding, none other than Mimmi Fulmers’s daughter (another PUO alum), that we had just heard about in Brisbane. Wow, small world!

Once again, it was dark by the time we arrived in Sydney, and we got to Darling Harbor in search of a restaurant just in time for the Saturday evening fireworks. We fled the mobs and retreated back to the pub in our hotel for beer, shepherds pie and fish and chips. Our room in The Grace Hotel was huge and elegant, but we didn’t have much time to stay there. In the morning we were picked up at 7 for a day trip to the Blue Mountains. This was our least favorite excursion – a lot of driving, only a little bit of walking, bitterly cold and windy, but clear views of some beautiful rock formations, cliffs and canyons, Christmas in July at a charming hotel for lunch, and a great hour at the Featherdale Wildlife Park. We had seen koalas and fed Kangaroos at the Koala preserve in Brisbane, but Featherdale had an amazing collection of birds and wallaroos and wombats and dingos and kwols and more. Back in Sydney we had a fantastic meal at an Asian Fusion restaurant in Darling Harbor. The next day, Monday, was our only day in Sydney. Michael headed for the Maritime museum and the replica of the Victory. I did a fast walking tour on my own of the center of town, the botanical Gardens, the Conservatory, the Harbor, and joined our scheduled guided tour of the old historical district, the Rocks. The weather was perfect – bright sun and 65-70. I met Michael by the harbor ferry docks at noon time, and after some confusion and walking back and forth, we managed to get onto the fast ferry to Manly where Riley Lee was waiting for us. Riley had worked with Michael in an opera project at PU last year, and had come to our mindful musician class on another visit to Princeton. A Grand Master Shakuhachi player, we also knew him through James and Frances. He walked us through the center of town and drove us out to a cafe with a spectacular view of the harbor all the way back to the sky scrapers of Sydney. It was extremely pleasant to sit outside and enjoy the beautiful day and his company. Then we did a great walk all around North Head, with views of the ocean and harbor side. On the ferry back to the city we had more spectacular views of the skyline, the opera house, the harbor bridge and all the harbor boat traffic. Back on dry land, we walked out onto the harbor bridge just in time to see another beautiful sunset. We stumbled around some other harbor neighborhoods looking for a restaurant that wasn’t there anymore, and found Kate Blanchett’s incredibly cool theatre company instead. We ended up at the Lord Nelson Pub for more beer and English pies, and then staggered back to our hotel to pack for the trip home.
On two Tuesdays, it took 30 hours from door to door to get home. The flight from Sydney to LA in premium economy on Quantas was lovely – great service, great food and movies, all during a regular day. Once in LA, the United nightmare started with crowded airport, crowded plane, no food, no pillows, in what felt like the middle of the night, even though it was somehow still Tuesday morning! We were really beat by the time we finally got home, but glowing with all the experiences of a fabulous trip.