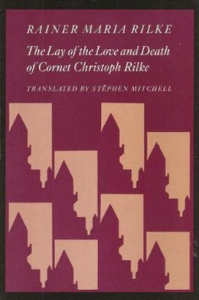 I thought Pierrot would be my farewell performance with the Richardson Chamber Players, but Micheal contrived to let me do one more thing. Does it count if it is not singing? The concert was a collection of things written in or by concentration camp composers and it included a fantastic piece by Victor Ullman that I had actually performed in NYC with Continuum a number of years ago. It was a setting of Rilke’s The Lay of the Love and Death of Cornet Christophe Rilke for solo piano and narrator. A 30 minute tour de force for both the piano and the voice, it was actually not that different from Pierrot. The text in German was incredibly dramatic and demanded a wide variety of vocal production, from soft and gentle whispers to wild and hysterical shouting. It includes a love scene, a daring escape from a burning building, a bloody battle with the enemy, and a tragic homecoming, very meaty and satisfying to work on. Rehearsing with my wonderful colleague, pianist Peggy Kampmeier, was great fun. We have performed so many things together over the years, it was easy to collaborate and figure out what we each needed and wanted to do with this piece. The big issue, as always now, was would I have enough voice and endurance to get through the whole piece and bring off the big dramatic climaxes? I was amplified once again for the performance, which helped a lot. I guess the fact that it was not actually singing helped as well, though I still needed to make use of very low and very high parts of my range. The performance went very well and everyone loved the piece. I enjoyed myself for the most part, though I had to miss a wonderful biking event. Humph, I had to miss the Sourland Spectacular because I was singing in Kansas, and had to miss the Bucks County Covered Bridges Ride because of this. Hum…where do my priorities lie at this point?