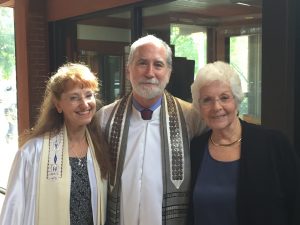 This was my last year singing High Holy Days in Wichita. An odd set of circumstances led to this outcome, but as usual, things seem to have worked out for the best. I’m very happy to have no future singing performances to look forward to at this point. In the photo I am standing in the entrance way of Congregation Emanu-El with my Kansas mom, Marcia Solomon, and Rabbi Michael Davis.

Back in August, the Rabbi called me to find out if I would be coming back in 2017. Of course for the past 21 years they have waited until March to invite me for the next Fall. This year various factions on the board were maneuvering to advance their agendas. I guess they felt they had an opening since I had foolishly revealed that it was getting harder to stay in shape for this marathon of singing. Now they were putting pressure on the Rabbi to have a decision for them by Yom Kippur. I was hoping to wait until after I had gotten through this years’ services to decide if I wanted to go around again, but considering the situation in August, I explored what it would be like if this was indeed my last year. To my surprise, I really liked the idea. The thought even floated in there “if Donald Trump wins the election, I’ll do the three month retreat at IMS!” At first this seemed like a rash threat. Then the more I though about it, the more excited I got about the possibility. As the election approached and our team seemed to be doing better, I actually felt a bit disappointed that I wouldn’t have to make good on my wager. Then….well, that’s another story.

When I arrived in Wichita for Rosh Hashanah, I told the Rabbi that I was actually feeling settled about this being my last year. He was shocked and upset. I guess he was hopping that I would continue, indefinitely. Ah, impermanence and the suffering of change. To complicate matters, the board had decided to give me a special honorary luncheon after the morning service. The Rabbi assured me that this had been suggested back in June before the August rumblings. I appreciated the gesture in any case and we decided we wouldn’t say anything about next year until Yom Kippur. The RH services went fine.

To prepare I was practicing for 30 minutes several times a week, but not really more than that. I had been drinking 60 oz of water a day and eating a strict low acid diet for weeks. Some days my voice felt almost fine. Tony and I actually had a very short non-rehearsal on the phone the day before I came. I tried not to talk too much at the Solomon family dinner before the evening service. I managed to sing decently and even made it through the morning service, which has the most continuous singing of the whole set. I tried to give myself over to the beautiful music and the sacred atmosphere, but for the most part I was working hard to get the job done. The luncheon was a lovely event. Thy presented me with a silver pendant necklace and there were heartfelt speeches. I told them they felt like family, which was very true.

The week in between in Princeton was full of the usual business getting the semester started and a special Music Theater Program conference day. Back in Kansas for Yom Kippur, Tony and I had another non rehearsal and talked about the future. He was very sad to learn that I wouldn’t be coming back. He really has been a trusted compatriot and colleague in this whole endeavor. I had a private moment with Marcia in the car as I drove us to another pre-service family dinner. She was sad but not surprised.

The Kol Nidre service was difficult. Most of the music is higher than the music on Rosh Hashanah. My high notes were not bad, but the more of them I sang, the less and less of my low and middle voice remained. After the sermon, and the announcements, and the annual appeal speech, the rabbi stood up and summoned his most dramatic “serious” presence. Ok, here it is: his speech was actually wonderful – how often do you get to hear your own eulogy! He also did one of his famous numerology tricks: measuring the distance between 261 Opossum Road and Wichita, and the number of trips back and forth I have made in 22 years, he calculated that I had traveled 108,000 miles. Wow – if it isn’t a cosmic sign that the time has come to stop I don’t know what is (108 prayer beads, 108 stupas around the monastery, 108 rounds of yoga breath of fire, 108 whatever else in some other Buddhist list). By the time he was finished I was crying and laughing and when I tried to sing the final aleinu only a croacking squeak came out. Most people in the congregation were stunned as I made my way out to my car after the service.

The next morning the Rabbi apologized for being so dramatic. We laughed but I told him he better not do that again or I wouldn’t make it through the day. Somehow I did make it through the day, and when it was over Michael Davis and I retreated to his office, as is our custom, to break the fast with sake. We sat and talked and laughed and drank and I got very tipsy. It was wonderful. The Rabbi is a very dear, sweet man, and I am grateful to have been able to work with him over all these years. By the time we emerged, most of the food in the buffet was gone. It was hard saying good by to everyone and my gut feeling was to flee, but I chatted with many old friends until I felt OK to drive back to my hotel.

As I boarded my 6am flight for home the next morning, it was still dark. I gazed out the window and let all the emotions of the past few months gradually well up in my heart until the tears came – holding things together for the cancer summer, supporting Michael through his anxiety, nursing my voice through all the changes and struggles of the past few years, finally letting go of a part of myself that has brought much joy but also much suffering. It has been really hard and now it is in the past. As we flew directly east, the glow of the sunrise warmed the horizon and kissed the wings of the plane. As I watched the colors of the sky change from deep purple to soft pink to dazzling orange to brilliant blue, the emotions in my heart changed as well: a new day, a new beginning, limitless possibilities, wonderous, magnificent, joyful.