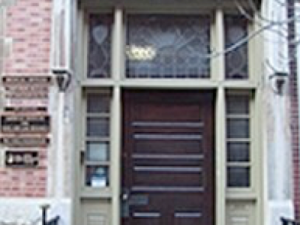 I’m writing this much later, luckily with the perspective of some distance, but for whatever reason, I thought I should document this part of the journey. January 29, I finally had my long awaited appointment in Philadelphia with Dr. Sataloff, famous ENT and healer of many singers. I figured I might as well get scoped by the best and see what was going on with my chords. After a great evening out and sleep over with Emily the night before, and an incredibly early morning – the appointment was at 7:30am – my initial impression of him and the office was pretty unpleasant.
To make a very long story short, after being evaluated by at least six different specialists, I left the office with an arm full of prescriptions for acid reflux meds, (was it the spicy tortilla soup and fish tacos at a fantastic Mexican restaurant in West Philly????) blood tests, MRI and more. Yikes, what have I gotten myself into? I tried the meds for two days and went from having absolutely no stomach or heartburn symptoms to feeling completely terrible and not being able to eat anything. Much to the consternation of his nurse, I decided not to take the meds, or the HRT that Sataloff recommended. (“Your husband will thank you.” – really??!!) They are very worried about the possibility of esophageal cancer so they want you to take the acid reflux meds which do all sorts of other bad things to you, but they don’t seem to be worried about the increased risk of breast cancer caused by the HRT. Hummmm.
I did try the low acid diet and was quite strict about it for several weeks. No cookies before bed either. Add to this that my dentist decided I needed gum surgery to make a crown fit better – I think I’m still paying for that little cairn I left in Kata Tjuta – and I spent most of the winter eating not much more than oatmeal and bananas! I also liked the vocalises that the vocal specialist, Peggy, did with me. They made my voice feel much better right away, and seemed to fit with the technical approach I had been using before I went to work with David Jones – higher, lighter, more forward. I went back one more time in early February to see Peggy, but once my dad got really sick, being upset about him and all the vocal stuff at the same time was just too much. I decided to put the Sataloff project on hold for now.