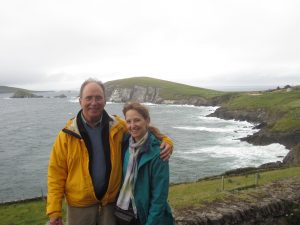 Michael will be taking the PU Orchestra on tour to Ireland in January, so we decided to go scout out some performance venues while having a bit of a vacation too. We flew into Dublin, stayed three nights at a lovely small hotel right off the bustling Nassau Street across from Trinity College. We saw the book of Kells, the famous library, and took the tour at the Jamison Whisky factory. We also managed to catch some fun music in various pubs in Temple Bar – – touristy, but a good show – and the more authentic Cobblestone – recommended by our Princeton colleague Dan Trueman. One day we joined an organized tour out to New Grange to see the prehistoric burial mounds. Our guide was very informative and entertaining, and the whole day was amazing and very worth while.
Saturday morning we made our way back out to the airport to rent a car for the rest of our trip. Driving on the wrong side of the road, on the wrong side of the car, shifting with the wrong hand, was challenging, but we did it in Scotland, and starting out on the highway was not too bad. We did fight with GPS right away when she told us to exit the motor way, and we knew that the concert hall in LImerick was right off the highway. It was an ongoing negotiation with the Irish voiced lady most of the week. After checking out the hall in LImerick, we made our way to Adare, an adorable town that reminded us of Hobbiton. It was especially charming in the delicious afternoon sun, which we wouldn’t see much of for the rest of the trip. Our B&B was lovely and we settled into our daily routine of Guinness at a pub before dinner. It tasted like a chocolate milkshake, smooth and creamy going down.

The next day we set out for Dingle, using a combination of Katie Scarlett – our name for the Irish sounding GPS – and the paper map. She didn’t seem to get ruffled when we didn’t do what she told us. She just figured out where we were and adjusted her instructions accordingly. Now we were in some typical rainy, cloudy weather, and we chose not to go over the precipitous Connor Pass, at the recommendation of our B&B hostess, because we wouldn’t be able to see anything anyway. We stopped at Inch beach and walked along the huge expanse of low tide flats, then continued onto Dingle. Our B&B tonight was a bit out of town, and would have had spectacular views, if it hadn’t been fogged in. Tonight we had a wonderful dinner and heard a fantastic duo, guitar and concertina, at the famous pub The Mighty Sessions. We bought their CD at a great music shop the next day and listened to it in the car, but it didn’t have the wild energy of the live performance.
Next was Killorglin on the way to the Kerry Peninsula. It wasn’t far, so we had time to drive around the craggy points of Dingle and walk in the wind and rain. Yes, indeed, the driving now was terrifying with narrow roads, hairpin turns, oncoming traffic at breakneck speed and those green hedges brushing the edges of the car. The hedges were often covered in all kinds of blooming wildflowers, yellow, orange, red and purple wild fuschia, just glorious if we dared to take our eyes off the road to look. We also stopped in Kilarney and walked around Mukross House and Gardens. How wonderful that it was an American who gave the land back to the Irish people and established the National Park.

Our destination on Kerry was Port Maggee at the western most tip. Our hotel was elegant and Michael got some time to rest and study music while I had to drive back to Killorglin to get my backpack which we left at the B&B. 4pm seemed to be tractor time when they all came out of the fields and onto the road. The going was slow back out to Port Maggee, but that meant that I didn’t have to drive 100 kilometers an hour. Dinner that night was delicious again, with one of the best versions of the fish chowder I had been sampling wherever we ate. The session in the pub next door felt like a church social, or community dance. The women had on dresses and high heels and danced and whirled to the familiar songs and jigs. Everyone sang along, and we were starting to learn the tunes and words to the familiar songs we had heard before.
The next day we explored Valentia Island, some vertiginous cliffs, a ruin of Ballycarberry castle, and a great museum about the Skellig Islands. It was still rainy and overcast so no chance of taking the boat ride out to the ruins of the monastery. Reluctantly we departed from this rugged and remote spot and continued on around the rest of the Ring of Kerry. Driving continued to be terrifying in the rain and fog, but spectacular when we could see anything. We were actually glad to get stuck behind a slow moving truck who would run the gauntlet of oncoming traffic for us. We had settled into doing what Katie Scarlett told us to do and arrived in the sort of grungy city of Cork with no problems.

At every B&B the hostess was friendly and talkative and we had some lively and entertaining conversations. In Cork, our hostess was a music lover and told us all the best places to go to hear music. At our first stop, where we also had a good, cheap dinner, and Guinness of course, the singer and fiddle player offered the same traditional sing-a-long songs we had heard before, but they were really wonderful musicians and performers who knew a lot about the world of traditional music. We then staggered across town to a quieter neighborhood with a less glitzy pub where we heard a more traditional session with six or eight instrumentalists. More Guinness, but too bad we didn’t think to order Murphy’s stout which supposedly has a slightly sweeter flavor and is only available in Cork. Oh well, next time. On our way out of the pub we got into a conversation with Bob, a former cattle rancher from Australia who retired to Cork to play the fiddle. He really gave us the inside information about who was who and how the sessions work – amazing.
Our last few days were spent in Kilkenny at a luxurious B&B just outside of town. We toured the castle, walked by the river, hiked around Inestioge and let Katie Scarlett tell us where to go. We also spent a day with Iarla Ólionáird, the singer who will be performing with the orchestra in December and January. He gave us an inside tour of the world of traditional Irish song and made Michael feel a little more confident about working with this magical new genre.

Back to the airport, we were so used to following Katie Scarlett’s directions that we didn’t think to avoid the route she took us on right through the center of Dublin!!! No matter – it was early on Sunday morning with little traffic, and I was much more at ease driving after a week of practice. When we arrived at the rental car return, Michael and I both breathed a huge sigh of relief – we made it back with no crashes or mishaps, still glad we had gotten the extra insurance. What a magical trip. We will miss the green green green, and the smooth smooth Guinness, and of course the music.