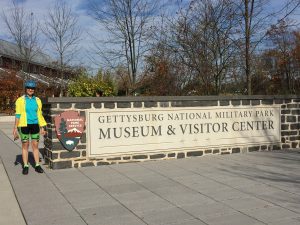 It was Fall Break and I was hoping to have a biking get-a-way in Lancaster PA with my friends Muffin and Tom. Unfortunately, they had to cancel at the last minute, but I found a wonderful replacement. The Philadelphia Bike Club hosted a biking weekend in Gettysburg and I managed to get one of the remaining spots. After tending to the health needs of husband and dog over the summer, and cancelling time at the Forest Refuge and my second study visit to Madison Wisconsin, I really needed a break and a few days to myself. This did the trick.

I left early Friday morning and got to Hanover, PA by noon, in time to rest a bit and regroup for a 30 mile ride leaving at 1:30. The crowd going on this ride was a strong bunch who mostly knew each other from weekly rides around the King of Prussia area. There were various new comers like me, and everyone was very friendly and accommodating – until we started up the first hill at mile 5 or so. They pretty much left me and my cue sheet in the dust. I did catch up with one man who was nursing a knee injury. He kindly rode with me the rest of the ride, and we caught up with everyone else at the Deja Brew coffee shop in New Oxford. I stayed with the B level group for a while on the way back and enjoyed chatting with various women from Philly, but then they left me and the knee guy in the dust again.

It was a beautiful afternoon, and we rode through rolling farmland and depressed looking small towns, the kind we never see in affluent North/Central New Jersey. I felt fine riding mostly by myself, with the emergency support number on the cue sheet. Back at the motel by 4ish, I checked into my perfectly nice Holiday Inn Express room, and chatted with various folks milling about. The Philly Bike Club had mostly taken over both the Hampton Inn and nearby Holiday Inn, so everyone assumed that you were part of the group. It was easy to strike up a conversation with anyone – pretty much the same conversations I have with my NJ bike club friends – about travel and gear and hills. At the buffet dinner, I regrouped with some of the folks on the afternoon ride and decided that they were “the cool kids.” It was easy to hang out with them and listen to their friendly banter and share talk about Philadelphia and our love of biking.

The next morning at breakfast I reconnected with two guys on the ride the day before. They were heading out on their own. It looked like bad weather on Sunday, so I decided to join a long hard ride to Gettysburg leaving at 9am. We would do 60 miles, and though they said the pace would be 15-17 mph rolling – yikes, that’s pretty fast for me – the leader assured me that no one would be left behind. So I joined the group of about 16 skinny middle aged folks, including one mother/daughter team. They seemed pretty similar to the Morris Area Freewheelers I ride with, except maybe a bit stronger and faster. I tried to draft with a husband and wife from South Jersey wearing matching outfits. They were actually great to ride with and I kept up with the group without much problem. In the ready room before we left, the organizers put out plenty of snacks, trail mix, bars, drinks and the fixin’s for PB&J for the 200+ folks here for the weekend. I was fully loaded when we set out, and kept fueling myself with sugar and carbs as the day went along.

The weather was perfect, 65 and sunny, with high light clouds. The route was through beautiful rolling countryside and farmlands. We arrived in the town of Gettysburg by mile 25 and started our tour of the battlefield. Our leader knew his way around pretty well, and other folks in the group had choice bits to add to the story. We stopped at the visitor’s center for a bathroom break, and then paused at various monuments pretty frequently as we made our way around the car tour road. It was solemn and sad to see this place and hear of the tragic waste of war, but I felt free and joyous to be on my bike. We stopped at a 7-Eleven to refuel before heading back to Hanover. I was feeling stronger and stronger as the day went along. It was nice to chat with folks or not as we continued onto mile 40, 50 and beyond. Some members of the group started fading and decided to take a short cut back. But that road had more traffic, and I was glad that I went the longer more beautiful route.

Saturday night included a sit down dinner at a nearby restaurant. I got a ride with the two guys I sat with at breakfast. One of them turned out to be the president of the Lancaster Bike Club. He’ll be useful to know if Muffin and Tom and I come to Lancaster some other time! I also found out that the son of one of the men I road with today works for the Juilliard 415 Ensemble and I bumped into a woman I had met on a ride to Lambertville. Small world. The “cool kids” had all done 100 miles today – wow. I’ll have to try that at some point.

Sunday did indeed bring a bad storm and heavy rain. No riding today. So after a leisurely morning, I checked out of the motel and drove back to Gettysburg and took my time going through the visitors center with its wonderful film and exhibit. I set off for home a bit after 2, managed to get my bike inside the back of the car, slogged through torrential rain on the highway, and made it home by dinner time. A much needed break and wonderful time!