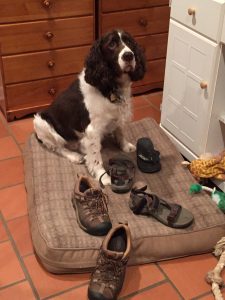 I can’t believe he is gone. We didn’t have enough time with him and now the house is too quiet. I find myself wanting to check on him or thinking of getting him his special food at the market. Poor dear Hugo had not been doing well as of last summer. He didn’t want to walk, couldn’t get in the car and wasn’t interested in his dry dog food. He walked in circles and seemed to get lost in the house.  He had been slowing down for the past year or so but was much diminished when we picked him up from the kennel after our trip to Scandinavia.

I thought perhaps he was reflecting the stress of the second cancer summer and Michael’s struggle to get back to full energy. We made him special meals, coaxed him patiently to make it to the end of the driveway, and wiped the goo from his infected eyes and lips. The vet said we could try some expensive tests but might not be able to do much to treat dementia or loss of vision, or even cancer. We should weigh the good days and bad days and decide what kind of quality of life Hugo was having. That sounded sort of dire. It was August and we weren’t ready to take any final steps.

So we cared for a hospice dog. He slept uneasily for most of the day but perked up for his meals of canned dog food, whole wheat bread, pumpkin, sautéed beef, peanut butter and other treats. It was hard to tell if he was uncomfortable and suffering or just an old dog asleep. As the weather got colder he really didn’t like being outside and started having more accidents in the house. We got up earlier in the morning to take him out and bought him a harness to help going up and down the stairs.  He showed less and less interest in guests coming to the house, though he still seemed to know us and occasionally wagged his tail in recognition. I think Michael thought Hugo was done long before I came around. I didn’t want to take his life, but maybe I was being selfish. It was such a hard decision, but it was awful to see him having such a limited life. Some days he seemed to perk up and be his old butthead self, but many days he clearly seemed to be feeling poorly.

There was a break in the weather in late January with slightly warmer temperatures and Hugo seemed to feel significantly better. But then it got bitterly cold again and he very obviously seemed worse. I was about to leave for Tucson and Michael felt it was time to act. We arranged for Dr. Martins to come to the house on a miserable slushy Wednesday morning and he was just wonderful with us and with Hugo. When Martins saw Hugo he knew it was time and said we were giving him a gift of releasing him from suffering. Hugo was lying on his bed and had no interest in getting up. It was sweet and peaceful to be with him and say good-by. It was no trouble to give him the first shot that put him in a deep sleep, and then the second shot that stopped his heart. Martins took him away and would return his ashes to us in the coming weeks.

Michael cried, and I felt calm and equanimous. I know I always have a delayed reaction to things like this. I had to pack and get ready to go on my trip. I was distracted and busy for the next week while poor Michael had to be home all alone. When I got home a week later it finally sunk in that we were once again dogless. It seems unfair that we only had Hugo for 5 ½ years. Maybe he was older than we thought when we got him. Maybe his previous owners knew he had health problems and put him out. Maybe we should have been more aggressive with his treatment. We’ll never know. We gave him a safe and stable home and loved him a lot in the short time that we knew him. He was a wonderful walking companion, a stubborn butthead, and a very sweet soul. We will miss him so.