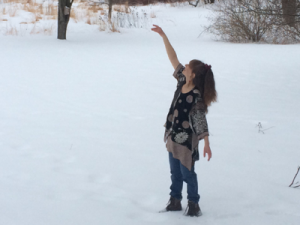 A lot of time has gone by since the Richardson Chamber Players performance of Pierrot on March 1, but I wanted to relate the crazy time leading up to it and my thoughts in the aftermath.
About a year ago I bumped into my wonderful colleague, pianist Jennifer Tao, in the hallway of our underground conservatory in the music building. Jennifer was on the RCP planning committee and asked me if I wanted to request anything for the next season. I wistfully mused that it might be fun to do Pierrot again some day. The minute these words came out of my mouth I was sorry I had said them. This was in the middle of the miserable winter when I was trying to rehabilitate my menopause voice. Schoenberg’s seminal Pierrot lunaire isn’t really singing, but it is still a huge work and very demanding musically, dramatically and vocally. I confided in Jennifer about my vocal struggles and she was very supportive and sympathetic. Less than a week later, I got an email telling me that RCP had indeed programmed Pierrot and everyone was rooting for me. What had I done?!

Fast forward to the summer when I slowly reviewed all 21 songs of Pierrot by singing the pitches through a straw as I tried to get my high holy days music back in shape. I had to admit that it was mentally stimulating to be interacting with Schoenberg’s amazing and challenging music. I also think it was actually good exercise to vocalize so much through a straw. As I reviewed the pitches, I was delighted to find that all the hard work I had done on the piece years ago had stayed with me and I remembered a lot of the thorny melodies and rhythms. Then I started reviewing the texts and translations, sinking into the gruesome scenes and tongue twisting German. I really enjoyed the work and it was good to have something to practice every day. By January I was running through each third of the piece to try to build up some endurance. My voice still felt as if it didn’t have the same carrying power and resonance it used to have, especially in the loud, intense songs. I wasn’t sure if I would have enough vocal endurance to get through the whole 40 minute piece, but I knew the music and texts really well, and had more confidence in the musical gestures and dramatic presentation of the poems.
February’s rehearsals came and I felt really ready to get together with my instrumental colleagues. This was also supposed to be a fun way for Michael and I to get to work together. Unfortunately, he was overburdened with other projects – the Orchestra tour to Ireland in January, so so glad I didn’t go with them, various other run of the mill disasters – and he didn’t really have time to prepare for our rehearsals. He was stressed and frustrated and not a lot of fun to be with. Rehearsing in NYC at Jayn Rosenfeld’s beautiful apartment in the Village was fine, but I was concerned about Michael and didn’t take quite the same enjoyment from the process that I had in the past. My voice got tired quickly at the first rehearsal. Over the course of five more, my endurance and power got a bit stronger which was encouraging. Use it or lose it to be sure. By the weekend before the performance Michael was having more fun conducting and so was I. The band was terrific, and everyone was enjoying working together and playing this fantastic piece.

It being February, of course there were a number of plagues going around the campus and all my students were sick. I told them not to come to their lessons coughing and dripping, and I sent many of them away, hand sanitizer and Lysol wipes at the ready. By Thursday morning I was still healthy, but then Michael woke up and decided he had a soar throat. ERGH!@#$%%^^&* Why does it have to be SO HARD!!????? I have been working toward this performance for a year, and it may very well be the last time I perform in Richardson. I don’t want to be sick for it! In Odessa in 2011 there was no where I could go to get away from Michael’s cold, and I did indeed catch it. I was a good sport and tried to be mindful of the situation and open to how it unfolded without aversion or judgement. Yeah, sure, fine. Right now I really don’t want to go through that again. I retreated to the germ infested music building to teach all day, careful not to touch any door handles or railings, and then went over to Learning Ally to read, anything to avoid going home. I bumped into my friend and sitting chum James and told him my troubles. He very sensibly suggested I check into a hotel. I had considered that, but thought it might be over reacting. Hearing James suggest it made it sound completely reasonable.
Waking up Friday morning still feeling OK, I packed a bag, threw my cross country skis into the car and checked into the Palmer Inn on Route 1 for $70 a night. I had a wonderful two day vacation and could relax and feel safe in a solitary and clean environment. I gave myself a mini retreat, sitting and walking and reading Dharma books. I also skied on the tow path by Lake Carnegie and on the Princeton Golf Course which was icy but beautiful. We had a good rehearsal in Woolworth on Saturday, Michael kept his distance, and I slept well in my motel oasis.

Sunday, March 1, I woke up feeling good, checked out of the Palmer Inn and drove home to get my concert clothes. Michael was feeling better and in good spirits and we drove into Princeton together in cloudy but dry weather. We had to have a run through on stage, and check the balances and sound system. We decided to give me subtle amplification, which just made the voice sound a bit more present, especially in the loud sections I was most concerned about. I tried to mark and save as much as I could. It was a shame we couldn’t have had a rehearsal on stage yesterday.
By the time we finished our rehearsal at 1pm, it was snowing hard, a blizzard! By the time the concert started, it had turned into an ice storm. Who in their right mind would go out in this? There were about 100 brave souls in the audience – enough to create a good atmosphere, but disappointing that many friends who had wanted to come stayed home. I felt relaxed and focussed for the performance, and I think it went very well musically and dramatically. I definitely felt taxed vocally from the rehearsal earlier in the day though. Even so, everyone seemed to like it and appreciated my appropriate antics and costume.
So, evaluating the whole project – the effort required to get the performance to that level versus the enjoyment and satisfaction taken from the process and the end result – was it worth it? Will I do it again? In the days following the performance, I would say actually no. The amount of dedication and sacrifice that had been totally worth it when I was younger, seemed crazy and unreasonable now. Yet, when I practiced some Faure and Mendelssohn songs the next week, my voice felt in better shape than it had in a long time and I enjoyed the feeling. As many participants in the menopause survey had said, you almost have to sing more when you are older to keep your voice in decent shape. Many also said that they had changed repertoire in order to keep performing. I am finding out first hand how true both those things are. As more time has gone by, I have been glad not to have any projects coming up, but I have continued to vocalize most days and sing through some repertoire several times a week. My voice feels more dependable and consistent for demonstrating when I teach. I don’t know if that will be my last performance or not.