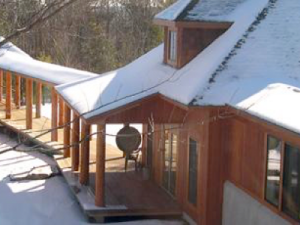 Remember how I have remarked that external circumstances so often reflect your inner state of mind? I had arranged to spend nine days at Forest Refuge with Taraniya teaching. The first thing that happened was that the check engine light came on in the outback just as I was getting on the Garden State Parkway. Is this serious? Should I turn around and go back? Should I find a service station around here and try to find out what is going on? Should I just keep going? Skip ahead – as I arrived in South Barre many hours later, a police car pulled in behind me and followed me the next five miles all the way to Pleasant Street. I didn’t go one mile per hour over the 35 or 25 MPH speed limit as my heart pounded in my chest and I hoped that Michael had put the registration back in the glove compartment after car shopping earlier in the week. What a mind state! But, I have known people who have gotten speeding tickets as they drove through the different parts of Barre so it was worth being careful.
This was all superficial warning. The check engine light ended up just being a loose gas cap that I fixed after reading the owners manual and talking on the phone to a guy at STS. I didn’t get a ticket from the cop in Barre and I did arrive safely at FR. But, along the way I learned from Michael, who had taken my mom to a Dr. appointment that morning, that a slightly elevated white blood cell count had turned into acute leukemia and the Dr. recommended hospice. Should I turn around and come home? No, everything that needs to happen can happen without me. I did stop and talk to Susanne, Emily, and Michael several more times. Trudie sounded OK, almost relieved, as she has wanted to be dead for some time now. I told her I was so sorry and I loved her. She said she would see me next week.

So I took a lot with me going into silence at FR. On the one hand I was incredibly grateful to be there in the quiet and stillness. On the other, plans were swirling in my head of bank accounts and lawyers and cleaning out the apartment, and endless imaginary arguments and fights with Trudie. They came in waves and I let them swirl as I worked with the love and compassion practices I had learned from John Makransky in October. It was bitterly cold in Barre with a few inches of snow on the ground. After a brief warm snap and some rain, the trails were frozen rivers of ice. I had been a bit too enthusiastic at a yoga class after seeing the Nutcracker in December and was still nursing a pulled quad and tender hip flexor and back. There was no way I was going to venture out into the woods on treacherous icy trails. In the first few days, even slow walking was painful. So I did a lot of standing and looking out the window practice. I also bundled up and walked on the beautiful deck in the bitter cold. I was exploring the non-preferential awareness that I had experienced at IMS last spring. Sitting was comfortable and sweet, especially with my friend Jane Woodman sitting in front of me in the hall.
As the week went along my leg and back felt better and I slept deeply. When the thoughts and stories weren’t swirling, I experienced remarkable peace and equanimity. No food or nature ecstasy. Not a lot of aversion either. This calm was actually better than pleasant. The cold outside was just cold, and the sensation in my leg and hip was just sensation. Some strong emotions came up and I cried from fear and anger and sadness, but then the moods and tears passed pretty quickly. Where did they come from? Where did they go? From nowhere into nothing.

Taraniya was very helpful, and when I told her I was afraid of fighting with my mom, she said there was nothing I could say or do that would change the situation. Somehow that was very freeing. I didn’t have to be “good” at being compassionate either. Just be with my own suffering and know there is no separation with that and my mom’s suffering. Maybe that is what U Tejaniya was talking about – going through the center of your own suffering and seeing it with clear awareness. The ability to be with it and see it is compassion. Yes, the months ahead will probably be hard, but I’ll come out on the other side softer and stronger and with no regrets. Even so, I spent every day wishing my mom peace and ease.