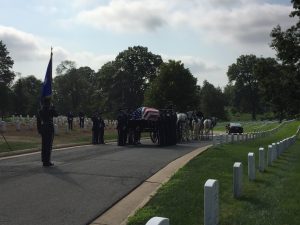 Michael’s brother Ev was buried in Arlington National Cemetery with full military honors. It was an emotional and surreal day. A retired three star General in the Air Force, fighter pilot and decorated Vietnam War hero, it seemed not insignificant that he died on March 15, the Ides of March and the day of Julius Caesar’s assassination, and was interred on the day of the solar eclipse. We drove down to Virginia on Saturday and joined the family and friends who were staying at a hotel right across the street from the Pentagon. We had a warm but sad reunion with Ev’s widow Joyce, her sons Tom and Steven, Michael’s sister Sue, her son Brooks and accompanying spouses and kids. On Sunday we all dispersed into Washington DC to walk the Mall and see the monuments. It was a beautiful day with clear blue sky, warm sun and refreshing breeze. Michael and I were overwhelmed by the new WWII memorial, and inspired by the peaceful grove where Martin Luther King Jr. looked out over the Tidal Basin. It was also reassuring to pay tribute to a truly great president at the Lincoln memorial. Michael felt strong walking over seven miles after being a tourist in Scandinavia.

Sunday night more than 50 friends and family gathered for pizza at the hotel. By Monday morning, almost 100 people wearing dark suits and dresses boarded busses after breakfast for the short ride to the Old Post Chapel at Arlington. Emily took the train from Philly to Washington early Monday morning and got a cab to the hotel just in time to join us on the bus. She had spent Sunday at the joyous, not to be missed wedding of some good friends. She hadn’t slept much, but neither had many of us in anticipation of this sad and emotional day.

We arrived at the Chapel in plenty of time for the 9am service. We stood around and visited outside for a while and then proceeded inside and sat down. At ten after 9, an official announced that there had been a mix up with the funeral home, and the service would start a bit late. He assured us that everything would go smoothly regardless of the delay. This was the military, after all.  I started crying when the casket finally arrived, draped in an American flag.  The chaplain seemed to move quickly through the service, listing all of Ev’s many decorations and honors. The organist played several hymns which we did not sing, but a wonderful tenor soloist gave a beautiful rendition of “On Eagles’ Wings.” As we left the chapel, I caught my breath and started crying again as we saw two companies of honor guard, maybe 50 men and women in all, and 25 members of the Air Force Band assembled outside in formation. The band played the fanfare which comes before Hail to the Chief and other ceremonial music as the casket was loaded onto a caisson drawn by four white horses, one of them rider-less. I held Michael’s hand as we both cried softly.

We loaded onto the busses and slowly followed the procession of horses and marching soldiers through the gently curving roads of the cemetery. We turned onto Pershing Road and quickly exited the busses and gathered in the road to wait for the fly over. Joyce had pulled every string she could and asked Ev’s friends in high places to arrange for four fighter jets to fly over the grave site during the ceremony. This necessitates shutting down Regan International Airport for 10 minutes, and clearing the airspace over all of Washington DC. The 15-minute window is not moveable once it is decided earlier in the morning. Because of the mix up with the funeral home, we would have the fly over at the beginning of the grave side ceremony instead of at the end. At least we got here in time. We heard them approach and they shattered our senses and shook our bones as they passed overhead and one plane disappeared into the clouds in the missing man formation. The ceremony that followed was brief but beautiful. They folded the flag as a bugle in the distance played taps and we all dabbed our eyes.. We heard a 15-gun salute and more music from the band. As the bagpipes started to play Amazing Grace, I saw some sort of raptor circling over-head: a hawk perhaps, or a young eagle? That touch was not provided by the Air Force or Arlington. After the ceremony, the family members walked down the hill a brief way to the actual grave site. A beautiful spot, it overlooked the Capital and the Airforce Memorial, and was not far from the grave of General John J. Pershing, revered WWI commander. A hero’s farewell indeed.

The busses took us to the Women’s Memorial Building where we enjoyed a lovely buffet of small sandwiches and pastries. We spoke to Ev’s oldest friends from his Vietnam Days. Most were now retired after illustrious careers serving their country. Back at the hotel by noon, we said good by to family and set off in the car for the ride home in whatever eclipse traffic we would encounter. All three of us were shaken and limp from emotion and lack of sleep. We ate junk food in the car to comfort ourselves. We have always felt close and comfortable being with Ev’s family over the years, and Michael has always accepted his brother as a soldier and warrior. I think Ev loved the Air Force as much as Michael loves music. But in all the years that I have been a part of Michael’s family, it has always been a culture shock to enter into their world which is so so different from ours. I felt that today, along with the tremendous sadness and pride. 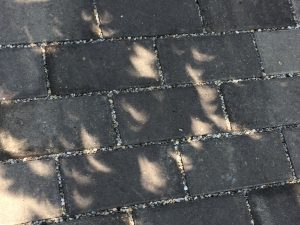 At 2:15 we stopped at the Maryland House rest area on I95 and looked at the eclipse through our pinhole viewer. Some other folks there let us borrow their eclipse glasses, and the dappled light through some fruit trees made beautiful little crescents on the walkways. We got home by 6, utterly overwhelmed by the events of the day. After all that has happened since Ev died in March, I’m glad this intense day is now behind us.