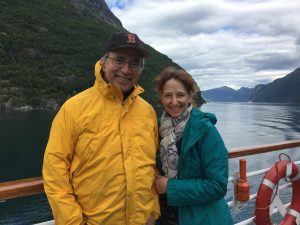 Was it really four years ago that we went to Australia for the International Congress of Voice Teachers and an amazing travel adventure? It was time again for the ICVT meeting, this time in Stockholm. I would present my menopause research and Michael would come along for a Scandinavian tour. A student of mine had spent last summer in Norway and she recommended seeing the fiords on the Hurtigruten. We flew to Oslo and connected to Bergen where we spent three magical days on the Vesterålen making our way up Norway’s western coast. The ship was small, 300 passengers, and comfortable, considering it was a working ship and the oldest in the fleet. I had bought a fantastic sleep mask at REI before the trip, but I couldn’t resist peeking out at 2am to see a light sky, or 4am to see the sunrise. The scenery was spectacular as we floated past islands, mountains and waterfalls. We took a fantastic bus trip from Geirangerfiord over Trollsteigpass and met up with the boat again in Molde. The sun set at 11pm in a blaze of red which was still glowing on the horizon at midnight. We wished that we could have stayed on the boat all the way up to the arctic circle, but alas, we’ll have to do that another time.

We flew from Trondheim back to Oslo and on to Stockholm, where we stayed one night in the old town before our bike trip in the archipelago. We booked this part of the trip with a company from the UK, and while we thought it would be self-guided for just the two of us, it turned out that there were several other groups on the same trip, mostly from the UK: a dad and his teenage son, a mom and dad and two smaller boys, and a couple from Belgium. We did end up riding mostly by ourselves, but it was nice to connect with the others on the trip at meals and on the ferries. Our trip leader fitted us with chunky mountain bikes, repair kits and ferry passes, explained the maps and instruction sheets, pointed us in the starting direction and sent us off. Michael was a bit uncomfortable on his unfamiliar bike and I was worried about him managing the whole distance, 35 kl, on the first day which was the longest. We stopped often to rest, and cut out a portion of the first half of the ride. We also opted out of the hiking trails for the day. All in all, we made it to our destination in one piece. I loved the country roads and dirt tracks we road on. The weather was perfect, partly cloudy and not too hot. Michael tried to enjoy himself, but he mostly just got through it and was very happy to relax with a drink in the garden of our very lovely hotel in Smådalarö overlooking an inlet of the Baltic Ocean.

The next day we took a ferry over to the island of Ornö and road around a bit before taking another ferry to Utö where we stayed for two nights. Michael took the next day off and relaxed in the sun at the hotel while I road to a rocky beach with Aonghus and Anna from Brussels. We had a lovely day together and enjoyed the famous fish restaurant at the end of the road overlooking the rocky shore. These islands seem like a combination between the Cape and Maine; very rugged and rustic with a nautical feeling, scrubby pine trees and rocky beaches. Instead of fried clams or lobsters, we had wonderful herring and smoked salmon. There was also great ice cream when you needed an afternoon break, and delicious cinnamon twists for any time. Michael was not crazy about the beer, but he was happy to drink whatever they had. The weather was a bit too cool for swimming, sunny and in the 60’s, even though I did take a short dunk in the Baltic just to say I had done it.

Michael felt better after his day off and we spent the last day riding around the northern tip of Utö on rocky hiking trails through deep woods. This definitely seemed like the kind of place you would find trolls! The bikes finally started to make sense to Michael as he fondly remembered riding on trails like these when he was a kid. We dozed on the three-hour ferry ride back to Stockholm and settled into our hotel by the Humelsgårten just as it started to rain. We had been so lucky with the fantastic weather while we were out in the archipelago.

The next day I put on my voice teacher face and headed off to conference land at the Royal Conservatory of Music. It was an easy walk from our centrally located hotel, and I connected with many familiar friends. Michael set off to be a tourist and had a fantastic time at the Vasa Museum. Our friend Mimmi Fulmer met up with us for dinner and took us to one of her favorite fish restaurants for a feast of seafood delights. I did one more day of the conference and presented my menopause paper with no trouble. The parade, which was the culmination of a week of Pride Festivities, marched right by our hotel and arrived at the stadium just next to the conservatory. This city sure knows how to do Pride, and it was fun to step out from the conference and watch all the colorful floats and rainbow flags go by.

I played hooky from the last day of the conference and Michael and I had two big tourist days together. He was feeling much stronger after being up and about for the past week and walking a lot on his own. We saw the Nobel museum and the Palace, and saw the Swedish Navy Band put on a great show at the changing of the guards. We did a tour of the beautiful new Town Hall and saw the blue room where they have the Nobel dinner and the magnificent gold room mosaic. After an afternoon nap, we took the train out to Drottningholm Palace for an evening performance of Cosi fan tutte in the historic theatre. The orchestra and the singing were all that we could have hoped for, but I was not crazy about the direction, and disappointed that they didn’t use any of the historic stage machinery. All in all, it was a beautiful evening and a great way to culminate the two weeks. The trip overall was wonderful, and we saw much natural beauty and had many nice times together. I was looking out for Michael the whole time, though, and was ready for a vacation by the time we settled into the long flight home.